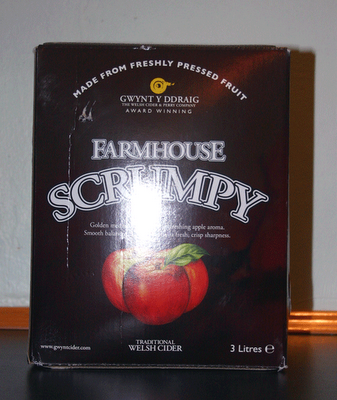 Gwynt y Ddraig. Farmhouse Scrumpy. This should be interesting. Add to this that it was found in Tesco in Cardiff (the only place I have ever seen it). This cider ought to be a good example of a 'main blend' - a staple blend of a quality producer of cider. And I like good blended cider.

Another thing about this cider is that its in a 5 litre bag in box. So I guess it had better be good eh! Bag in boxes are a neat solution to serving a small(ish) quantity of draught cider - though don't expect it to be sparkling!! This one, a 5 litre box, is just the right size for a fridge too.

It a deep colour with no fizz at all and the aroma of cider fruit (maybe a gentle apple juice behind it too - well, it is a medium!. It certianly looks appetising enough.

Oh dear, sadly, its flavour is almost killed by juice. What a shame! OK, there is tannin is there a plenty but is very overpowered by the sweet juice (if its not juice, then it is a very odd sweetener:-) There is also very little discernible acid in it - the cider is tasty but doesn't really compete with the sweetening - which goes for the aftertaste too. Its a bit like alcoholic apple juice - I don't doubt that it's all juice, just that there is too much of it that has not been turned in to cider!

For me, this drink doesn't compare with their other ciders - true, it is a medium which I don't normally go for, but I would have thought it would have been thoughtfully sweetened - much in the same way that Perry take care to just sweeten enough but are sure not to overdo things and kill the cider.

On the positive side, its not repulsive. I can drink it just fine. But then it was a toss up between trying this and the Gwynt Dabinett... oh well, we all make the wrong choice sometimes (and I do still have the Dabinett to look forward to).

I am glad I tried it - although I do now have 5 litres to get through. Luckily I have a weekend with the in-laws coming up and father in law does like a sweet cider from time to time:-)

A score of 64 is disappointing for the producer of such things as Orchard Gold and Black Dragon. But, its better than a kick in the teeth eh! 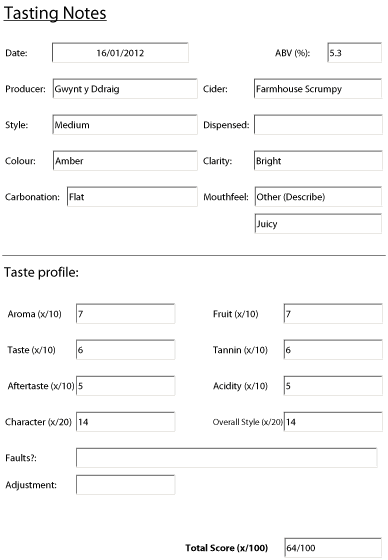