Carrying on with 'stuff that you may not find everywhere', I have something special to review; its not every day you can get hold of a real live sidra. This bottle, to be fair, was exchanged for some cider, so I have no idea where you can get hold of it.

Knowing nothing about a cider maker is not really much fun, but thankfully they have a website that is in English, so this helps write something about the company (n.b. its actually a pretty good website, with some rather impressive photographs you may wish to see for yourself: http://www.isastegi.com/index_en.htm

Based in the Asturias (I think... my geography is often rather shaky!!) isastagi is a farmhouse cider producer who started making cider in 1983. Judging by the photographs, they have moved on somewhat... although the processes look very familiar to me (just on a larger scale). The 'rules' of making cider in Asturias as probably as severe as the French regions - so you can be sure that a Sidra Natural should be what they say it is. The bottle carries the year of vintage (2012), and at 6% everything is looking good.

Well, when I say looking good, the Asturian taste for cider/sidra is quite different from our UK tastes. We try to avoid cider becoming ascetic (vinegary) whereas the Spanish like it. Perhaps it is something to do with the heat - or the food that accompanies it... after all, how many times have I said that cider is a product of its own place and from its own place? (OK, not much, but it is true)

OK, lets get on with opening this bottle. Not sure if I should do the whole pouring from great height or not. There is a slight pffzz when the bottle opens but this is a still cider for all intents and purposes, although pouring roughly does kick it up a touch. It settles still, bright and yellowy golden.

The smell is rather sharp with a moderate ascetic quality about it. I am expecting it to be almost eastern in style, although the ascetic is probably the most significant character - though this isn't unruly or harsh in any way.

The taste is interesting - certainly not one for those expecting a Magners or Thatchers. However, it is quite unusual to unaccustomed taste buds. It IS rather sharp, and this comes across as quite vinegary to my tastebuds. If this were musing, the cider would be a moderate note whilst the acid a few octaves higher with a slight screech of ascetic hanging over the lot. There is no tannin I can detect - so it is light in itself.

Now, I have to admit that I feel this cider has been balanced for non Asturian drinkers - it isn't challenging all that much and I think this may be the reason why. It is a nice introduction to Sidra though - OK, I have tried the Sainsbury's version which was sweet and sickly. This isn't like that at all - it is much more the real deal: Dry, light and sharp with a lingering aftertaste. I have tried a few Asturian sidra's recently though, and this isn't really in their league (though they were much more of an experience!)

If you can find it, it is a sidra worth trying. If you have never tried sidra before, then it is all the more worth it. 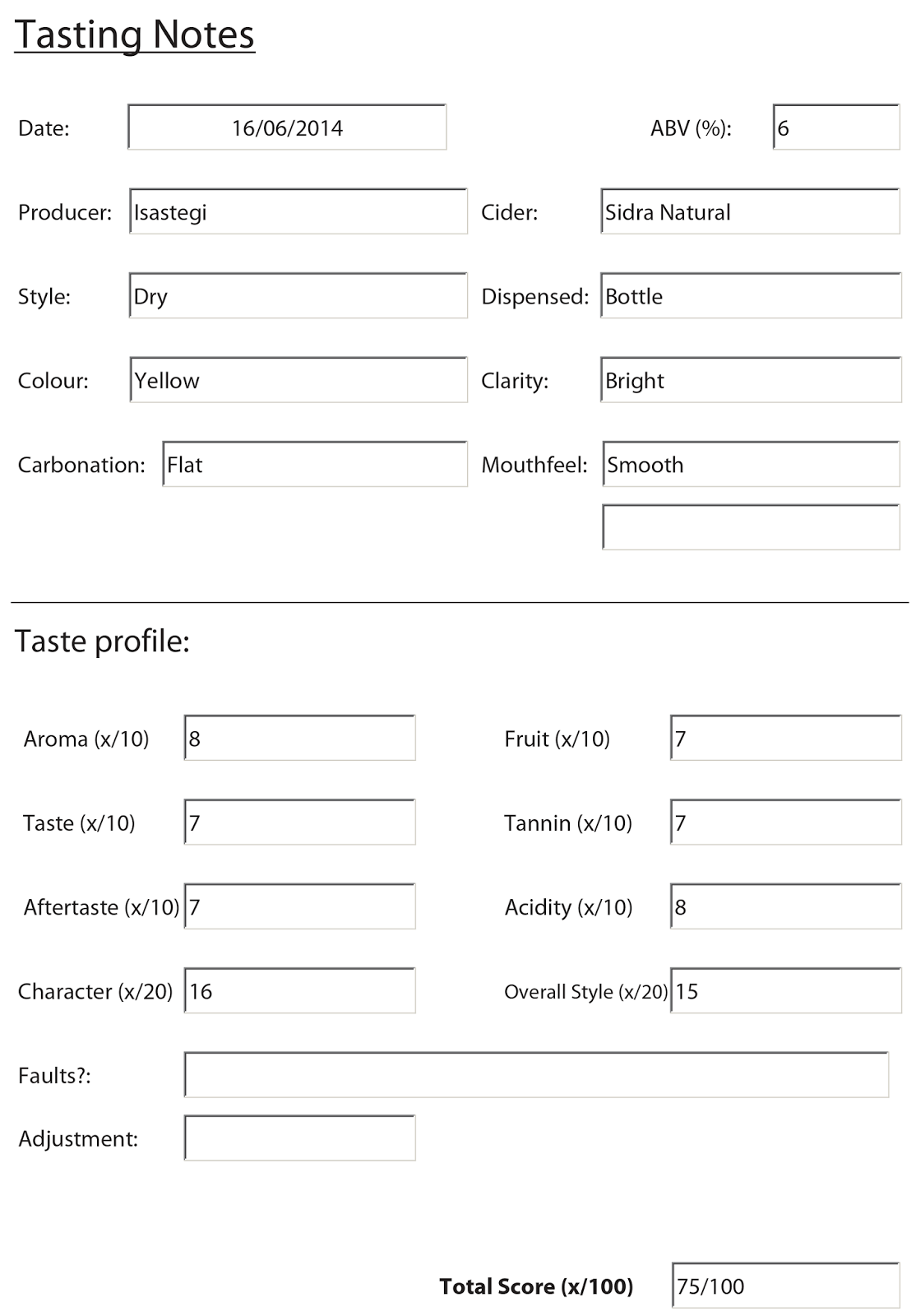