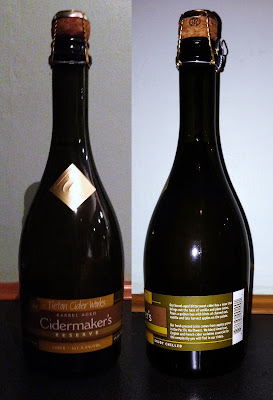 OK, this one has sat around for a while patiently waiting its turn. I am not that familiar with American hard ciders, but did get talking to one earlier this year and the kindly sent me a bottle (although I would not say it is free... the duty payable on delivery definitely compensates for any free idea!

Being the first hard cider, I guess it gives me an opportunity to explain what is meant by that. 'Hard Cider' basically is what the Americans call 'cider' (OK, this is written primarily for a UK audience - so if you are reading this in America then 'cider' is what British call 'hard cider'). It really is as simple as that; no difference from the French calling it 'cidre' or the Spanish calling it 'sidra'.

Well, that was a complex and space consuming explanation wasn't it. Guess that gives me more room to go through this hard cider properly:-) Perhaps.I should elaborate on how I came to get this cider... though it was a while ago now. Every now and again I am asked to try a specific producers wares - I get sent updates and announcements and the like. I am normally unwilling to do this: these reviews are fun if nothing else and I don't want others taking them more seriously than they are. One thing I do try to do is to promote the good stuff. If one person reads a review and chooses a cider based on it... and then really enjoys the cider too... well, that makes the work worthwhile doesn't it.

This one was slightly different. I figured that it was the only way I was going to get to try a cider from across the pond. So there you go... I actually think its brave of Teiton... I wouldn't want to be the first to send cider for review!!

The first thing to mention is the bottle. Very classy - I don't think I have seen cider served in a champagne bottle like this! Also, the label is nice - not sure about some of the language though; "vanilla and plum notes"... hmmm... "hints of charred oak"... OK then. I guess I could put this down to the difference in language from across the pond, I like the design though.

It pours out foamy and fizzy. I can smell it from across the room - it is an interesting smell and more along the dessert fruit tradition, light and a touch tart in the nose. However, if I am thinking of it I am getting some vanilla in the nose... though I am always dreadfully suspicious of being 'primed' to smell something. No plums though:-)

It is also ever so slightly hazy - I am not convinced it has been filtered, though there is very little sediment at the bottom which is common in bottle conditioning.

The taste is very light and has a nice amount of fruit in it. There is a sharp element to it but it has some body too - perhaps a touch of sourness that is likely to come from using a fair amount of culinary fruit in the blend. It comes across as a medium to medium dry and is nicely done so the sweetening doesn't overpower the character. It also tastes rather strong (and at 8% I am not surprised!). Finally, it is a little yeasty; though this is possibly a result of it sitting on my shelf maturing in the bottle as much as any bottle conditioning.

The aftertaste is pretty long and light in the mouth. I do have to say that I got a touch of oak - a hint - but not charred oak really.

I quite like this cider. It has some character and individuality (although, as this is the first cider from the USA that I have tried that is a dangerous statement to make). With a score of 72/100 it joins the ranks of the bronze apples.

Re-reading this before posting it I do have one thing to say that has nothing in particular to do with this cider. It is aimed at other cider reviewers. Actually, it is to specific 'reviewers' who claim to review cider. See I do keep my ear to the ground occasionally:-) My message is simple... Read the above review. That, my friends, is how you review and appreciate a cider. For God's sake, if you are trying to do right by those you are reviewing (those who actually put themselves out there by producing the stuff) then actually give the bloody stuff a chance and don't just judge it off-hand like you already had a problem before you even started!

I do like reading, viewing and listening to other reviews - it gives a perspective to what I write. But quite honestly listening to their babbling was just a joke! Don't just take a gulp and declare something crap. That shows no work; no research, thought or consideration and, quite frankly, insults the cider (and the producer) that you are trying to review. It reduces your views to ignorance and is, quite frankly, pathetic. I think I speak on behalf of every other reviewer of cider, ale or whatever when I say that from what I have heard this kind of review does no service to anyone and makes us all look bad.

If you don't like something then try to communicate what it is you don't like - with knowledge or some kind of vocabulary (if you have any). Currently, your reviews are no use to man and beast and are simply a waste of three quarters of an hour! There are other reviewers, both blogging in text or as video's that are great - my advice would be to read them, think about what they are saying... perhaps even try a couple and compare (if you can get them). A good review doesn't simply diss something - it tries to communicate something that others can use - agree or disagree... if you can't, please do us all a favour and don't bother!

As a final note to this - I have always said that if producers or drinker feel that my own reviews are unfair then I ask that they let me know. I hope my own reviews have NEVER fit into the category I mention above... I always consider a cider, do as much research as I can and if I find a fault then try to think about what it is. It is easy to knock something, but lazy not to do the work - every cider and producer deserves that. 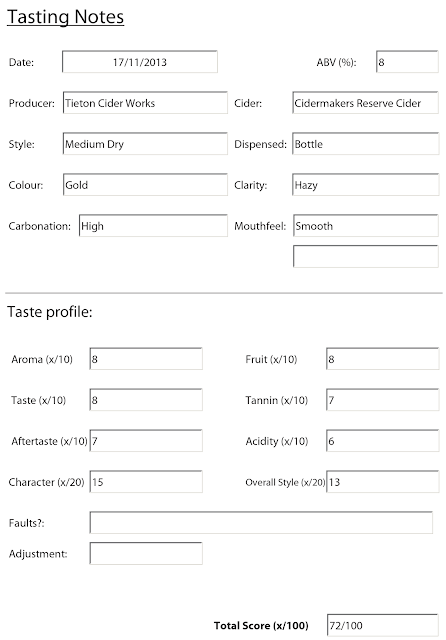