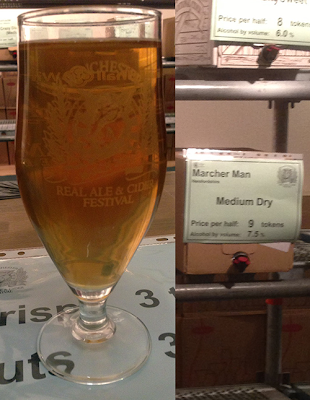 One and half pints drunk so far, and there are still a few left to try. Well, there is a limit to how many I can drink... and I suspect that the limit on how many ciders I can usefully review is a lot less than that! So, I figured I would go for a cider that several have said is very good. When I say several, I mean a few have tasted it at the bar and liked it – ever encouraged by the people behind the bar.

Whilst very helpful, I cannot help thinking that the guidance towards the Strawberry cider that seems to be going on defeats the object of introducing people to cider. After all, its simply a cider based alcopop – how can you expect people like that to make the transition to a proper cider (which is what I figured CAMRA cider bars were about). I was informed that it was a ‘good introduction’… well, not nearly as good as actually drinking a cider, surely!

Grumpy moment aside, this cider is made in Herefordshire by Marcher Man... except, that doesn't make sense. I know a little, but more research tells me that Marcher Man are a part of the Marcher Cyder Circle (that is cyder with a y!) Beyond that, it appears that the circle is made up of individual Welsh cidermakers (or should that be cydermakers) from around about the Welsh Marches. So, perhaps Herefordshire may be accurate, but on the Welsh side of it anyway!

Being medium dry, its not too far out of my comfort zone, and amd expecting a nice well rounded cider (judging by the slurping and slapping noise of the last person to try it:-) When it comes crystal clear to me it is a little bit of a surprise, I hope it isn’t too mucked about with!

It doesn’t have much of a smell to it – though most flat ciders don’t exude aroma. What I do get it mildly fruity and pleasant. The taste, however, doesn’t hold anything back. It is a generous, fully rounded and fully tannic cider. Earthy and apple fruit with almost a citrus tang of acid – all balanced together. Saying balanced, it is a nice version of the word – not tamed. Each part is fairly full on, but they work together very well.

I think I may even be wrong about the filtering. It doesn’t seem to have lost a lot of its profile and fills the mouth with flavour. The aftertaste is moderate in length but leaves a nice taste. I do feel I should have done the pint, but for the sake of reviews I will move on:-) Oh well, sometimes it isn’t all drink, drink, drink you know. Oh wait, yes it mostly is! 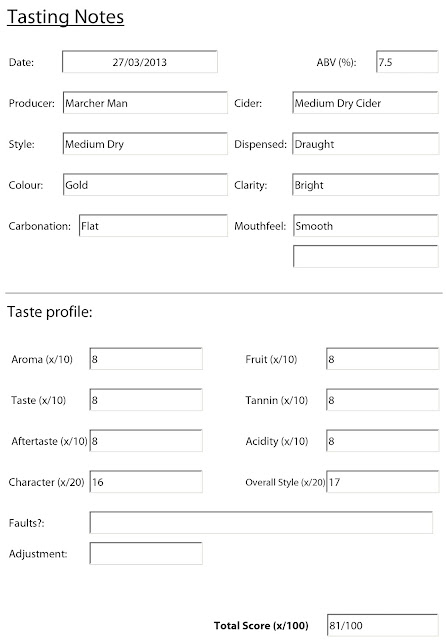