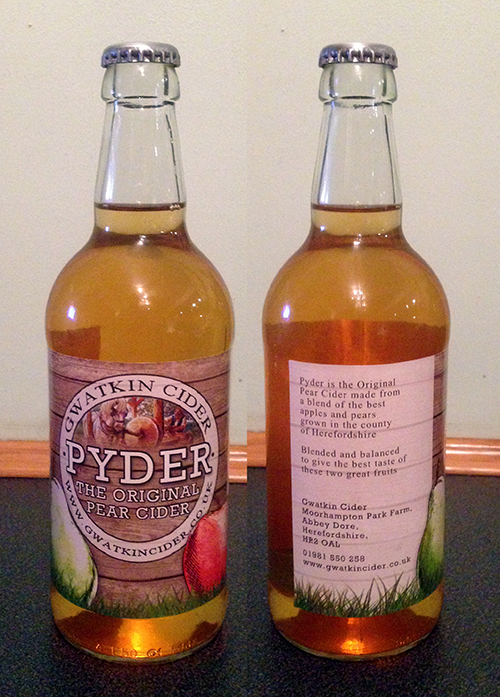 A confession: I had intended to run the Winchester tastings through for the next week or so… but as I have not been able to write up the rest of them I am going to do a slight diversion to this Gwatkins Pyder first.

Apple and pear blended together (Perry/Cider… Pyder – geddit?) is becoming rather popular these days. However, unike its berry or beetroot counterparts pyder actually has some traditional precedence. Gwatkins puts it as “the original pear cider”. I can’t say that I disagree with them – though I suspect pear cider had more to do with making perry marketable in the eyes of the PR guru’s who didn’t understand what perry was.
The bottle has an ingredients list – apple and pear juice, pure sugar and a trace of sulphites. Good, although at 5% was any water a part of that process too? I know I do down dilution, but having a touch of water in a cider is not a terrible thing… after all, those apples must be washed before milling, and many people dilute sulphites before adding to a juice? And then how many producers are thoughtful enough to dry out freshly washed tanks prior to filling? This stuff isn’t a sin in itself – just the abuse of it for commercial interests (i.e. diluting to deliberately create additional volume and lower % juice).

Anyway, on with the Gwatkins. Now, before I open this bottle I should say that, in my experience, Gwatkins have a tendancy to over sweeten things. This is true across their range – so it isn’t some mistakenly sweetened error. There are a few producers like this (a growing number in fact) – and whilst I cannot say what the reasons are for this I also cannot see how it makes the drinks more popular or accessible in general. Anyway – I shall not judge this until it is in my mouth… although the sugar on the ingredients was clearly used for something.

It is quite light golden in colour and has a moderate sparkle to it. As I write this is it sat newly poured near to me and already I can smell the pears – wow that is quite a strong smell. The fruit is just about jumping out of the glass at me. Sticking my nose in reveals apples (mostly), of the cider kind – not a dessert fruitiness at all. The pears are much more restrained now, but it does smell light and airy – nice on an evening that is sunny.

Oh bloody hell it is all sugar. Well, that is a huge shame – I was expecting good things. I am having to dig deep into this drink now, because it really is very sweet indeed. I am getting the pears at the back of my throat – they are soft and fruity (and would be delicious I am sure if it weren’t for this over sweetening). The apples – which are the bolder taste, relatively, are all but drowned out with a sugary sweetness that does this pyder no favours whatsoever. It honestly makes it rather quire syrupy and not at all to my palate.

Grrrrrrr. I hate berating a producer of such high quality cider but this is not by any means the first Gwatkins that has been shown the heavy hand of sugar (and lost marks for it). Now, I am sure they don’t really care what I have to say and I am sure it is massively popular with sweet toothed drinkers, but this really could be so much more – I get hints of it’s potential… if only a bloomin hydrometer was used as a guide to adding sugar!

I am having a second glass of this to try and get beyond the moan, which seems to have taken residence on this review! The majority of the apple coming through is bittersweet and farmy; the pears are gentle yet aromatic. It seems a really decent blend. But. BUT. I cant get it… it is surely a complex and interesting blend. There is much more going on than the drinker is allowed to experience courtesy of bad sweetening.

The aftertaste is fairly short and (unfortunately) sweet. So sad!

This pyder scored 60/100 – and that was on the basis that I could get at some of the flavour. As a note, I reckon if it was more sensitively sweetened it would be bronze or even silver medal. Shame. 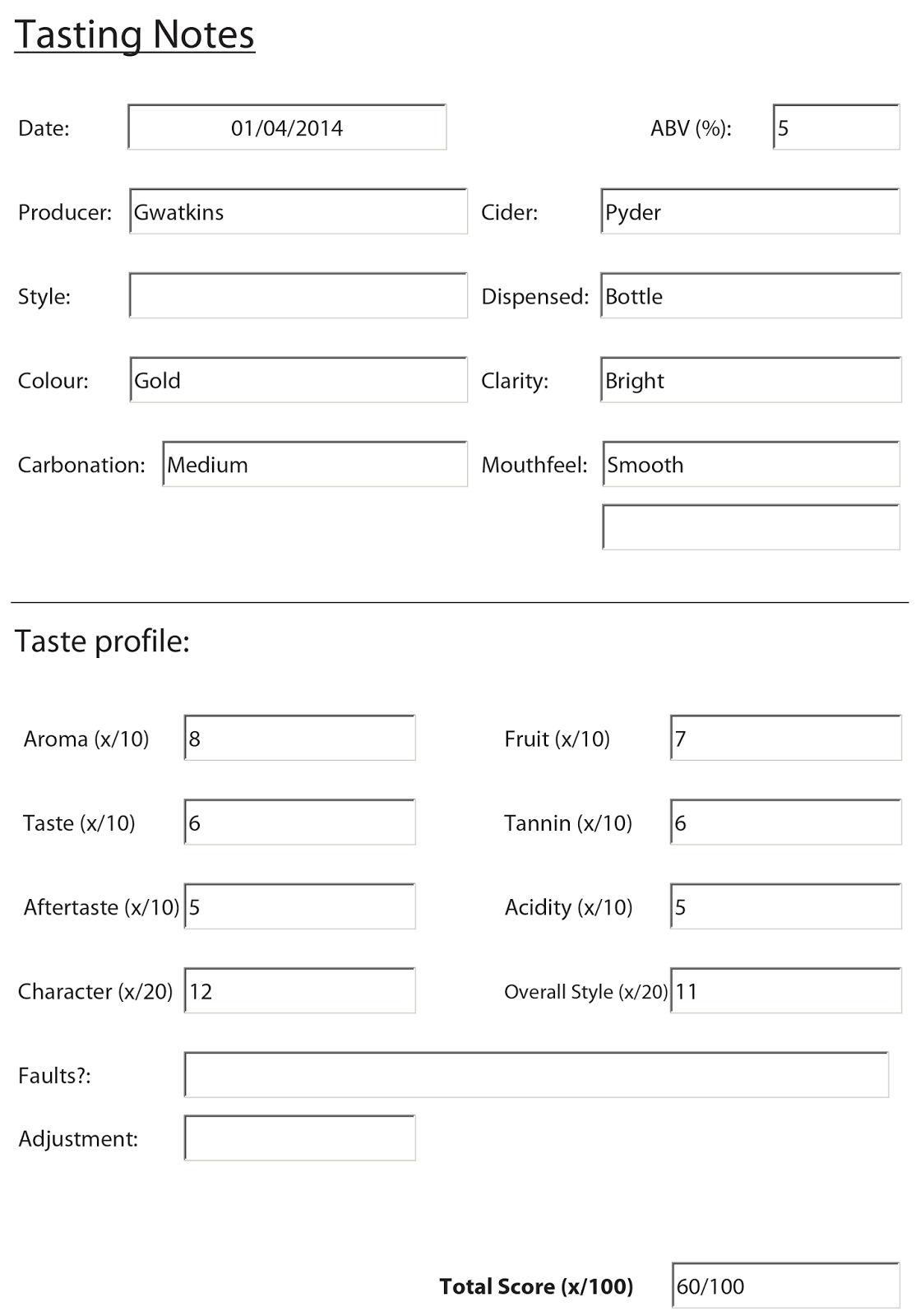