Having taken a poll asking specifically whether high juice cider ought to be differentiated from the stuff on the mass market, I did say that I would report back once it was done with the results. No, I am not going to try and put together some clever graphs to justify an argument - I have a healthy skepticism of statistics and polling. Here, though, is an image of the final results for the poll: 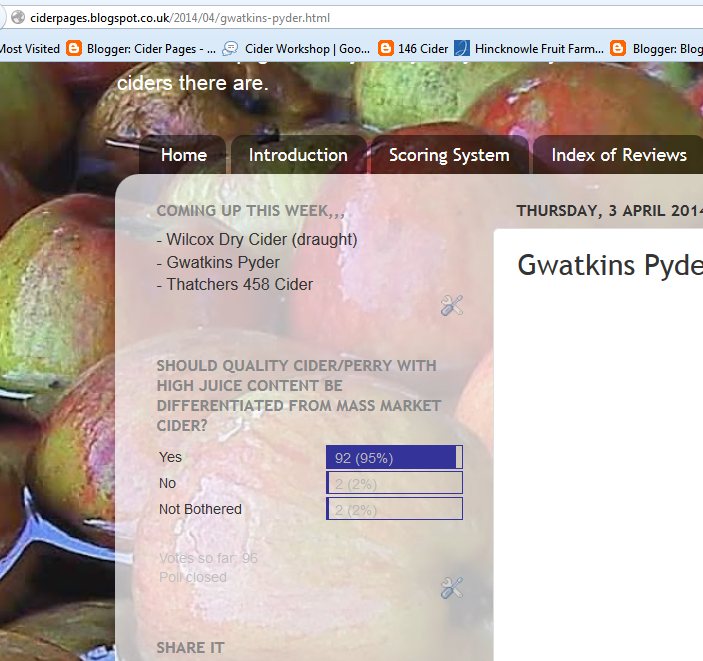 On the face of it, it is a clear 98% message that quality, high juice cider does need something to identify it from the mediocrity of mass produced ciders. Only 4% either didn't care or disagreed (and I think that one of those may have been me testing the form out:-) Do bear in mind though that by and large this blog is read by people who are bothered to look up the cider they are drinking... even though I hope that some of those are coming to cider from the mainstream. Also bear in mind that 100 odd votes is not exactly representative of those consuming cider in the UK.

That aside, it is a clear message. And if I am to put my cards firmly on the table I am very happy with the result - I feel that there has started to be a groundswell of movement in the cider industry who feel the same way. Not - and I must emphasise this - not in any way to denigrate the mainstream producers! As someone who came to cider through drinking Magners, and as a small producer, I recognise that there is a place for 'easy access' ciders. I also have to bear in mind that both the high and low juice industry have been entwined in the UK for over 40 years: from orchards to equipment, from bottles to markets.

So, if this is to be done it has to be sensitive. It has to give producers on the cusp of high/low juice cider the opportunity to participate. So it needs to be reasonable but differentiate effectively. And that takes the cooperation of the producers - not easy by any means but certainly something that consumers cannot force or lead on. There are many who feel that each decree from CAMRA just loses potential CAMRA producer/suppliers - some of very high quality cider... so telling producers what to do is not the answer, producers need to opt to do it for themselves.

So, do I have anything to say about this? Well, yes and no. There IS an opportunity to raise the profile of quality high juice cider on the table. However, currently I cannot say anything more (and I suspect I am stretching it at that!) All in good time, but I really hope that cider makers realise its potential!

The Cider Pages guide to drinking cider - For the novice!

People don’t tend to flood to cider farms or dedicated cider shops because they cannot but because they are happy with the stuff they can get in Asda (etc.) Hard truth I know – and I can back it up with some figures too: 10% of the alcohol consumed in the UK is cider. Of that 10%, very roughly 1% is high juice or artisanal in any way. So 99% of the 10% is drinking mainstream stuff. Sobering and often overlooked – it is true that high juice cider are on the rise but, lets be honest with ourselves here, there is a long way to go! 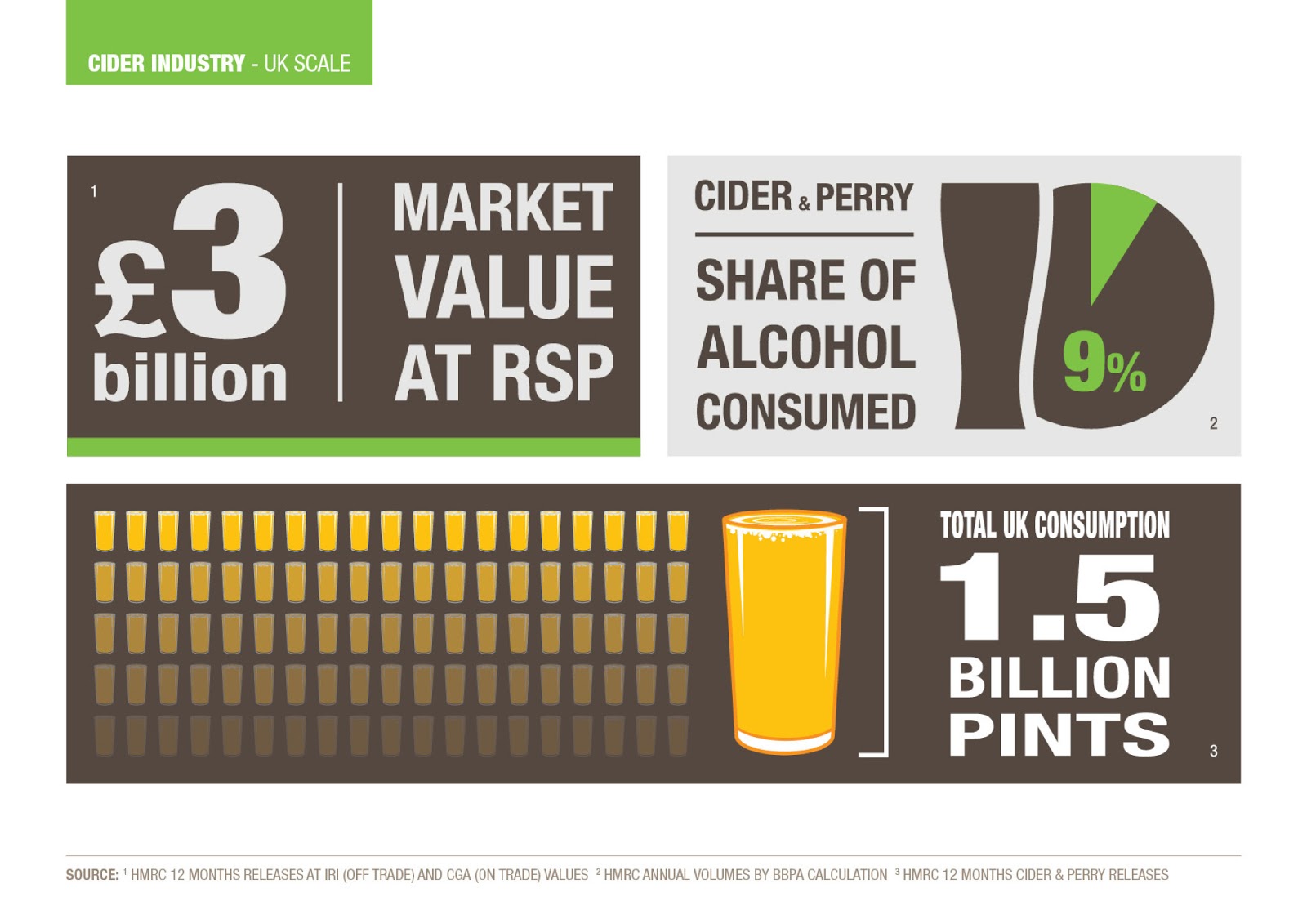 What is it about the nationally produced ciders and pear ciders that do it for the masses? – moderate and generic (mediocre) flavours, sweetening and none of those nasty niffs or aftertastes. It is ‘premium’ in that it is pretty much straightforward (mediocre). They don't leave things to chance; they want a consistent ‘recipe’. That isn't anything like the high juice end of the industry; although there is some control and adjustment going on it is done with integrity in mind and using natural devices (types of apples, fermentation conditions and sulphite). Limited consistency and a 'live' product - in as much as it is allowed to ferment and mature naturally. However, the potential for producing truly excellent ciders is all at the 'high juice' end of the market.

In my small way to differentiate and lead people to the more traditional ciders and perries, I would like to present some ‘tutored tastings’. These are free. Yup – not a bean. And can be done just about when you are ready and prepared to explore stuff. And, on the whole, will use ciders that you can buy off the supermarket shelves.

For pretty much my whole blog-life I have felt that developing a taste for real, traditionally made cider is a journey – not a one stop journey at that. I have (however) struggled to find a way to articulate it (you should see the folder on my laptop marked ‘Cider Journey’ – full of dead ends and really badly written stuff!) It strikes me that I can do this and leave it for posterity – those who want to find it will and, as I have said time and time again, if one person finds it useful then I have succeeded.

So – watch out for blog posts marked as ‘Cider Journey’… and if you are of delicate cider constituency, avoid them!!
Posted by Thoughts on cider... at 12:00