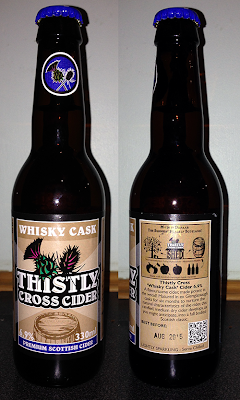 On to my final Thistly Cross purchase. I have deliberately saved this one until last as it should be quite interesting. I have also had a bit of pre-feedback suggesting that this is pitched by some as being the best cider in the world. Well, it has a long way to go if the others are a judge of it - however in fairness to Thistly Cross and to everyone else I am going to put all that to one side and review it with an objective head on.

Now. I love a bit of whisky. I think it is also proven that I love a bit of cider too! Putting the two together is interesting... one of my favourite ciders of all time was a Rum barrel cider. However it is so easy to go wrong with this kind of combination. Not enough and, well, what is the point; too much and it ruins both cider and whisky. It is also a contentious issue with HMRC... their rules on what can and cannot go into a 'cider' are fairly strict and spirits is not on the list. They want to know if the spirit imparts strength and flavour to the cider... although so far I don't think that many have been caught on this technicality (that, my friends is the story of the cider industry!!!)

This is perhaps more fitting as I believe this is the cider that started all that concern...

Again, I like the labelling on the bottle. It is 6.9%, which is fair for a cider and it is maraked as medium dry. The lavel also says it is a "flavoursome cider made potent in the wood". Hmmm. Is that a taunt to HMRC? (or the reason perhaps that they looked at it in the first place:-) Anyway, it is a deeper colour than their other ciders and has a low-moderate sparkle in the glass.

This cider has a deeper smell too. Am getting the whisky, which is quite a strong smell... I am not sure how sweet it is though. I suspect it is sweeter... It is quite a pleasant smell, however.

The first thing I have to say... and I am hoping that Thistly Cross read this... is in what world is this a medium dry? Please humour me and get some juice to the same level of sweetness as this cider. Then tell me the gravity of it. using my amateur head on this I would say it is around 1.020, which is medium sweet in my books (actually, doing a little research on cider competitions and how they bracket sweetness... which is a fair guide to it I think). OK, to everyone else... this feels medium sweet to me and would benefit from being half the sweetness it is.

Having said that, this is not a bad cider at all. The whisky is there and quite pronounced in the drink. I am getting none of the wood, although being a deeper colour of gold is probably a result of this. The whisky also compensates a bit and acts against the sweetness and the sharpness. And that is how I would describe this cider, light and sharp but with whisky overtones that make it more complex and enhances the drink

There is a fairly long aftertaste, which is pretty much whisky and a bit of apple... but nice.

In summary I think I have to judge this cider far too sweet for its description but, taking that into account, is the best Thistly Cross cider I have tasted so far. The whisky is the overriding flavour to the cider, but that considered it works and actually enhances the cider.

Now, addressing the enquirer who suggested that someone had said this was the best cider in the world. No, it is not. I don't expect even Thistly Cross themselves accept that. However, it is definitively Scottish cider and should be supported. If they can sort out their sweetness it would be better! 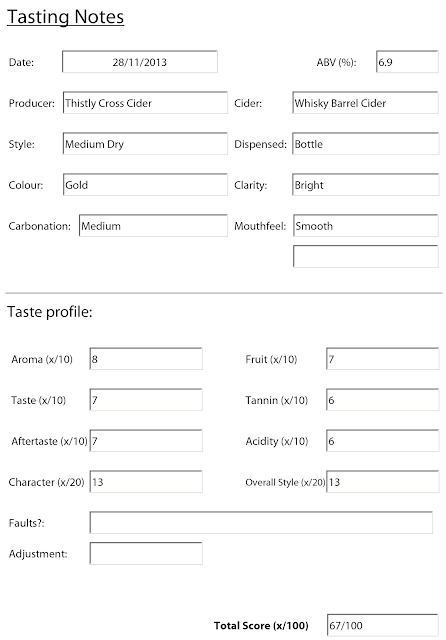