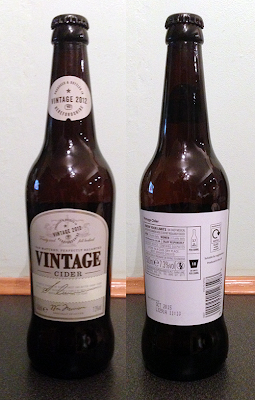 Now I move on to the second cider from Morrisons – see, I am trying to equalise my supermarket ciders, although I am not sure that many of them have received any kind of apple from me. This either says something about the big store attitudes to what they think cider ought to taste like or (more concerning) it is the attitude of the producers who make the stuff feel that supermarket cider ought to taste like. Hmm, there is a thought there – I guess if I were making cider for the supermarkets AND my own bottles were going to sit alongside them I would make sure that my cider came out as being better. Actually, no, I wouldn’t. Not that I would ever get the chance to do this, I would make sure that I not only made first rate cider for all but would make sure my name was on the bottle.

That being said, I am not going to prejudge this cider. After all, the ‘own brand’ ciders that tend to do best are the Vintage versions, so I am expecting this cider to be pretty good. It had better be – the only other Morrisons cider I have is their standard medium dry… which looks like it was made by either Magners or Bulmers!!

It is moderately sparkling – almost identically so to the last Morrisons cider. It looks quite light gold too, although the smell is much more bittersweet than before. There is still some juice up the nose though. Thinking some more, it is very similar in its composure (in a smelling kind of way). Guess I ought to try it then.

This is less watery than the organic. It is also drier too – a medium dry which has been gently back sweetened with juice. The tannins are quite pleasant, although I do wish they wouldn’t feel that it was so important to adjust the acidity to balance things out – it detracts from the experience of the fruit. Speaking of fruit, I am getting some… which again is more than the organic too. As a bit of a distraction, there is a fairly strong taste of So2 (sulphite) which does affect the tannic taste somewhat.
A moderate length aftertaste is also nice, and ends in a tannic coating of the tongue.

A score of 70/100 - true to form, it is the Vintage ciders that proove to be the best tasting ciders made by/for/whatever supermarkets.

I think I may be now qualified to advise cider fans that, if you must buy supermarket own brand ciders, then the ones that you ought to go for are those that are vintage. Of course, this isn’t straight forward – Morrisons have two that they call ‘Vintage’ – the organic has a vintage tag… but this merely means that it was made from a single years apples. Look for the cider called Vintage.

If I ever crack supermarkets for my own cider, it will be on the basis that it is very different from most of their line up. I can see that there are a few ‘smaller’ producers doing it… although the very nature of the beast is that many are producing something more ubiquitous to sell than they would if you visited them directly… 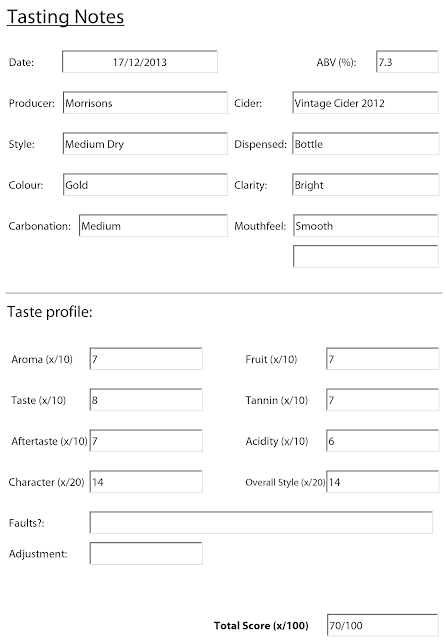