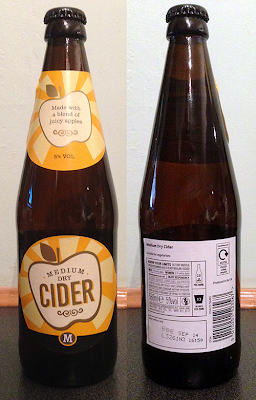 I think I may have already tried the best of the Morrisons in it's Vintage cider - this one I suspect is much more their mainstream offering. It is packaged in what looks like either a Magners or a Bulmers bottle... so my thinking is that they made it for Morrisons. Wouldn't it be bonkers if it turned out to be the best of the lot?!

It is quite a plain label, and I am keen to get a drink this evening, so I am going straight for the cap! Well, it looks faintly golden, highly carbonated and polished within an inch of it's life. So far, so as expected. I think this is going to turn out to be another cider for the masses: nothing remotely challenging to the taste buds and sweet.

The cider remains quite foamy and this punches the aroma out,,, which has a lot in common with boiled sweets - to be honest it isn't even that appley either. I am not getting much in the way of any distinctive flavour out of the smell... better taste it then.

Oh. Its really quite watery - I don't think I am being too offish by saying that it is a little like apple flavoured water... not cider flavoured but apple flavoured. OK, it is fairly well balanced between sweetness and acid - I am getting a hint of tannin but nothing that really stands out from the rest. It has a short aftertaste which is mainly sweetness.

Apologies for the short review - there isn't exactly that much more to say. A score of 44/100. 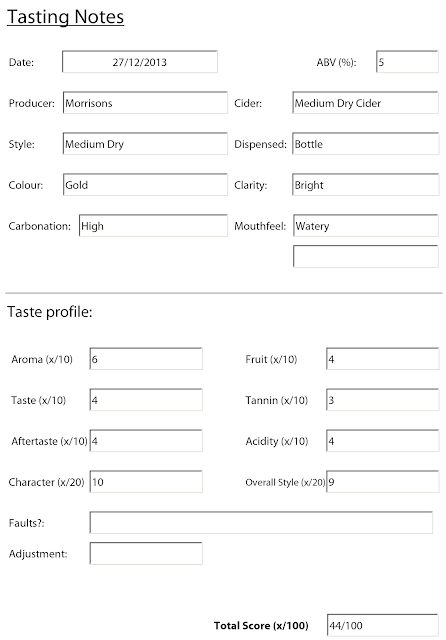 Email ThisBlogThis!Share to TwitterShare to FacebookShare to Pinterest
Labels: Morrisons