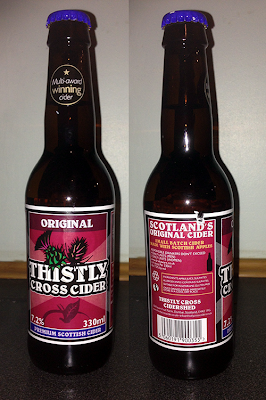 Lets give a second bottle of Thistly Cross cider a look in. I have three in all, including their Whisky Cask Cider (which I am told has been declared by someone the nicest cider in the world). Having tried two previously that have been far too sweet, I am hoping that the 'Original' is, well, a little more 'original' and dry in nature. Mind you, having made the effort of bringing them all the way back from Scotland, I will drink it none the less!!

Unlike others (no - not going to bang on about cider reviewers again) I will draw a blank slate and open this bottle before judging it:-)

At 7.2%, this cider is in the middle of what I would expect for a cider that describes itself as "small batch cider made with Scottish apples". Again, I like the presentation of the bottle, the saltire on the cap and the fact that it is actually made from apples. Again, as I am unaware of cider apples being grown en masse in Scotland I am expecting this drink to be on the lighter, sharper side of things.

Once it is in the glass (with a 330ml bottle you can get it all into a single glass) I can see that it is bright, very light gold and quite highly sparkling. It has a strong smell - light and sweet (again) and no tannin in the nose. There is some citrus in the smell too, which sort of already confirms that it is going to be a light, sharp cider.

The taste is different to the smell. It is sharp - very sharp I would say although this has been countered by being way too sweet. Why do some producers (newer ones - I can think of Tutts Clump, Mr Whiteheads and Three Cats as examples) think that good cider needs to taste so sweet... their market research must be wrong! There is also a bit of an odd taste to it too - almost whisky like actually (I hope this isn't the wrong cider in the bottle... or the wrong label for the cider).

As I have mentioned Tutts Clump already, I have to say that I do draw a comparison between them. Apart from the sweetness, there is a touch of sour to it as well... this (to me) indicates a high percentage of culinary fruit; usually of the Bramley kind; but I have to say that other apple varieties - if not fully ripened when pressed - will give a sourness to a cider. I think it mainly affects culinary varieties but unless the sugar has been left to fully develop then you get this underlying sourness which builds as you work your way through the cider.

The main job of the sweetness in this (however it got there) is to offset the sharpness of the cider, leaving me to think that it is there to attempt to balance things out a bit rather than add a huge amount. The aftertaste is long, sharp with a note of sweetness that lingers longer still.

I do think I prefer this cider to the 'Traditional' that I tried recently. It is a more honest cider in many ways, but is still entirely too sweet. And I cannot think why - the Scots don't necessarily have any sweeter teeth than the rest of the UK and whatever you may say about the mainstream producers the better ones don't sweeten this much! 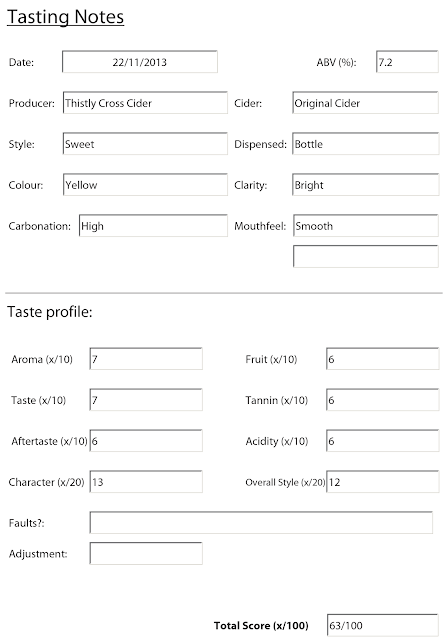