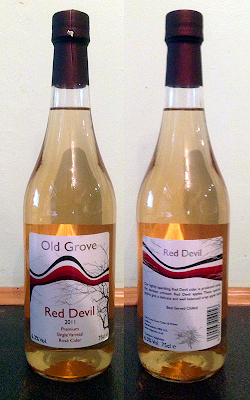 Time for another single varietal cider that has been sat on my shelf. If there is one thing I will say about Old Grove, it is that they are not afraid to try new things... it takes a brave cider maker to do something with Bramley, for example (and I believe they have won awards for it too... which offsets the fact that I wasn't that keen on it nicely!).

I found this in Herefordshire earlier this year, as it is perfectly clear and with no sediment still I suspect I can safely say it is filtered without having to open the bottle. To be fair (and looking back at my notes on the other ciders) this is common to the Old Grove ciders I have tried. Polished and bright - the lot of them. In fact, looking at the bottle before opening it, it has a blush about it. Old Grove describe it as a 'delicate and well balanced rose cider'. Well, it is definitely rose coloured!

Red Devil is a dessert apple. It's actually quite a new variety (1970's) and is a cross of Discovery and Kent. Now, I do know that some producers start the pressing season with a Discovery blend... light, early apple which is quite acidic without huge flavours. I use another dessert variety to start things off - but as with most early varieties wouldn't necessarily make an SV from it. Now, Red Devil is early to mid season harvesting (September-ish), which I suspect gives it slightly more character. However, the notes I have got on it suggest that it isn't a keeping apple (so has to be pressed fairly quickly).  One thing all sources say is that the juice is pink in colour. To keep this from juice through to the cider though is quite an achievement.

It opens with a low/moderate fizz to it, which settles down nicely. In the glass the rose is more of a tint than anything, I am not getting much of a smell of it, but what I am getting is a light smell, citrus with a touch of body about it.

The taste is a bit odd - it is very light and delicate. It is also very clean (which probably is as a result of the filtering). Hmmm, it is a bit syruppy to be honest - though this isn't really the sweetening. I would say it is a medium to taste. However, because it is such a delicate flavour the sweetening overpowers it somewhat.

How can I describe it? Ithas a rather weak cidery taste, light and a little sharp. There is some body to it (though there aren't any significant tannins). However, the sweetening - whilst not huge - does build up in the mouth and becomes the dominant taste after a while. The aftertaste is fairly short (although the sweetness lasts a while).

I do feel that it has been over filtered. This is something I have said before about Old Grove and I do feel (especially with such a light cider) that it detracts from the overall experience. The fruitiness of this drink must surely be much more pronounced than it is.

However, alongside some ciders I have tried recently, it is not a terrible cider and for those seeking to try different single varieties then this ought to be on the list. It isn't going to challenge the sense though. 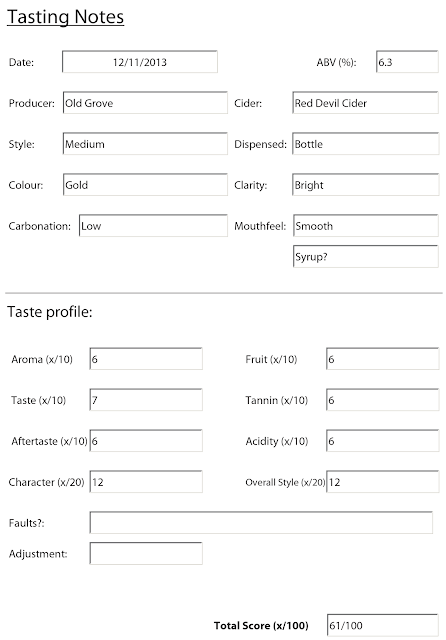