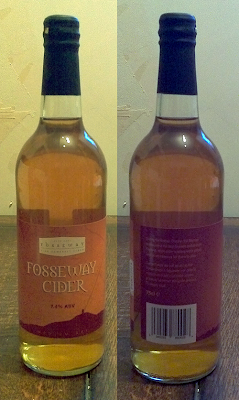 Another new producer for me this evening; Fosseway Cider. As is clear from the name, they are situated on or near the Fosse Way, a Roman road that runs through the west country towards Londonium (I am not even sure that is what London use to be called!) Needless to say, they make something of this on the bottle - although I am not at all certain that the Romans were the first to plant orchards in the UK... but lets not let that get in the way of a decent cider eh!

Coming in a 750ml bottle, this cider is golden and exceedingly bright. It looks attractive in the bottle too - simple design and, although I must admit to being jaded with 'traditional messages' at the moment (and, as someone who really appreciates full juice cider, I struggle to work out how craft cider producers can differentiate themselves in an honest way from the bullshit that comes out of the mouths of larger companies who can employ PR firms to spin a traditional message!)

Into the glass, this cider pours with quite a fizz; which carries on right through the glass and has to be force carbonation. The smell is a fairly funky fruit flavour, with cider fruit popping up the nose. Its quite unusual, but also rather pleasant too. I wonder how it will taste though as it is crystal clear.

To be honest, this is another cider where I just feel the filtering has stripped a lot of character out of it. I am not sure whether this is actually what the public want, or whether the filtering people have persuaded many west country cider makers that this is a good thing for the cider. From one drinkers opinion, it is not a good thing for cider. I don't believe it needs it, cider isn't wine, and producing an unfiltered cider which is clear and retains all the character is actually do-able without being cloudy scrumpy!

In actual fact, there is still plenty of taste left in the cider (though I do wish it were unfiltered). It is rather fruity, as per the smell and is a nice blend of both tannin and a slightly sour acid. Both compete for pole position in the mouth. The acid wins... just. Its by no means a safe cider, although it has been tamed quite a lot.

It has quite a short aftertaste, although it is acidic, tannic and pleasant. It does leave a bit of a presence in the mouth (though I quickly fill it with more cider:-)

I do like this cider, though I do think my overall score has been affected by the filtering going on. I do hope that producers quickly realise that they need to be a lot more gentle with filtering. I know the big producers do it, but who says that the big producers are making the best cider (apart from their own media and PR firms). 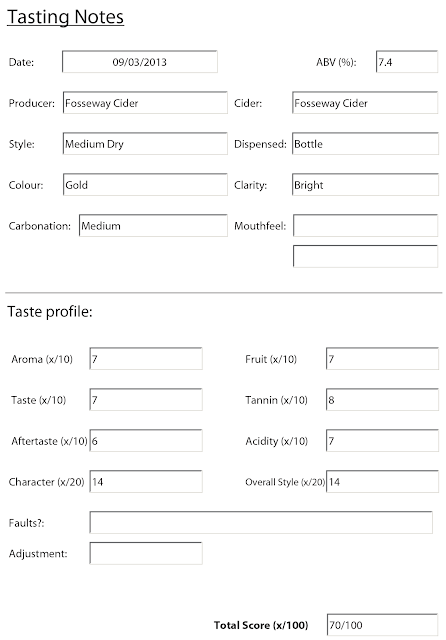