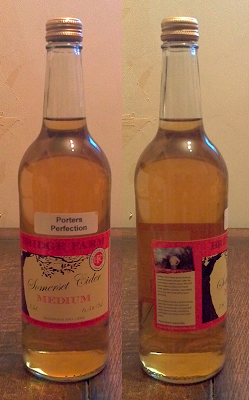 I cannot believe that this is the first Bridge Farm cider I have tried for the sake of Cider Pages! Oh well, so much time... so little to do! (as the good Willy Wonker/Gene Wilder once said).

This is a bottle of single variety Porters Perfection. So, in an educational 5 minutes I decided to tag it as 'Cider101' as well as a review. Porters Perfection is an apple I have used before, although not in any great quantity. It is a bittersharp variety... some say extremely bitter sharp! So I am expecting my taste buds to be challenged by this cider (if it is true to type!) In body, Porters is a large, orangy apple and the trees can be heavy cropping (which is good for cider makers). My recollection of it suggests it tends towards biennialism (fruiting every other year).

Bridge Farm initially struck me as being one of those out of the way and, dare I say it, quaint producers from Somerset. Turning to their website for a touch of history presents a different perspective. This is a forward thinking, award winning Somerset cider maker on the lines of Burrow Hill (in fact, they sell cider brandy too... which was distilled for them by the Somerset Cider Brandy Company alias Burrow Hill).

Nigel Stewart has been making cider in excess of 20 years, so should know what he is doing by now. They sell a broad variety of ciders, including a few single varieties of which this is one. To be honest, a medium would not have been my first choice, but that is all Bristol Cider Shop had in at the time.

True to the label, there is not an ounce of fizz when the bottle is opened, and the drink pours silently, golden and bright into my glass. I do wonder if this is going to be one of those times that I forgive filtering (though I will get to have a good rant about it in the next Cider101:-) The smell is gentle, but I am getting a tannic and sharp hint off of it. I smells full bodied and fruity too, which is nice given that I am unsure whether the acid is going to strip my throat or not!

Its the fruity flavour that hits your taste buds first, very quickly followed by an acid punch - not so much a punch as a train approaching! Let me explain that. The acid is there a moderate way alongside the fruit at first, but it seems to develop and grow, and grow and develop. A bit like the first bite into a chilli. The filtering must have been necessary and has done its job in reigning the acid in. But it is still all acid - a lot of it, but alongside it there is tannin too (though not as much of it!)

This is a lovely cider. It is a bit of a challenge but it is at least true to its apple. And it is very refreshing! I reckon this would be great in a blend - no doubt it can be found in Bridge Farms own blends! However, as a single variety it has to be on the fringe of sanity!

The aftertaste is a little more forgiving, although it still has a definite twang to it. As for it being in a 750ml bottle; definitely think 'share'. It is not a session cider!

After all that, this Porters Perfection cider score a bronze medal with 79/100. Just shy of the silver apple. That is because it is so well made and true to its form rather than it being the finest cider in the land. I doubt that Nigel Stewart would think of this as the pinnacle of his cider making... but it is jolly nice to have tried it! 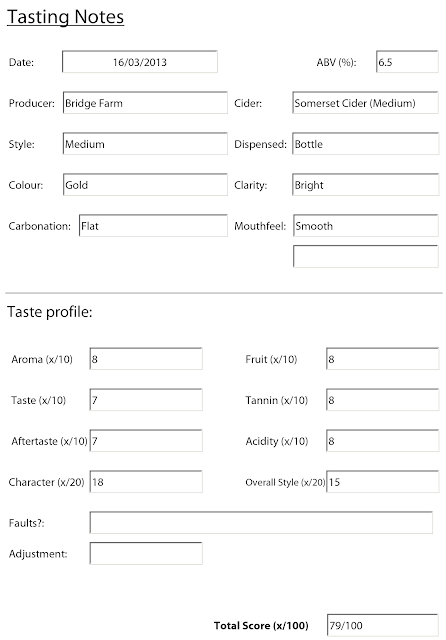