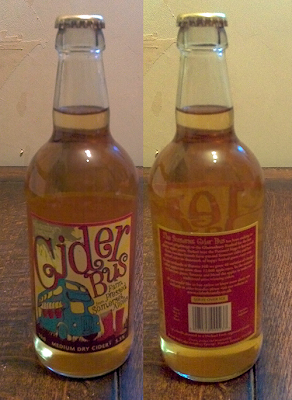 Aha, so is this the stuff that you bathe in mud and pay rather a lot for at Glastonbury each year? And I thought it came in a tanker:-)

I have never been to Glasonbury... I came close once in the days when you could try your hand at jumping the fence, but alas the surf was far too good. My mates and I contented ourselves with a full day on the waves, followed by an open fire in the evening by our tents listening to the concert at full volume (it was the Levellers too, so that should give you an idea as to how long ago that was. In fact, it became a bit of a 'tradition' to go off surfing during the Glastonbury week... that and the annual 'Run to the Sun' pilgrimmage (and 'traditionally' the sea was flat each and every time we went!)

Enough of that. Cider Bus is a medium dry, 5.5% golden cider with a funky picture of the bus on the label. "Farm pressed from Somerset apples"; lovely. That is what I have come to expect of one of my favourite cider producers. "Serve over Ice".... hang on, did they miss this bit when proofing the label? Mind you, if it's tailored to Glasto fans then I could understand it being there (do they have ice at the festival too? How civilised... though I could think of better uses than putting it in cider!)

On opening, there is quite a large pfzz. This fizz remains at pouring and during the drink. It smells mildly fruity and cidery... not what I would call a typical Burrow Hill cider... and there i a faint whiff of sulphite too. Just looking at it, it looks very filtered - leaving it lighter and fainter than I would expect. The fizz has to be force carbonation too. So it is a cider for the masses... though never thuoght Julian Temperley was the type!

Moving on to the taste I must confess to be rather disappointed with this cider. I guess its going for the taste of Glastonbury and is aimed at those who lived off it during the festival (in a reminiscent kind of way), but its not really doing it for me. It tastes very mild - almost watery - with low level tannin and a balance of acid. I am not sure I would call it particularly tamed as faint. The tannins are there, and they are nice - but its as if the volume has been turned right down.

Going through the glass, the tannic flavour does build up a little and is moderately fruity and tannic by the end. The cider is also fairly dry, so the sweetening has been done lightly. Not that it needs too much sweetening as there isn't that much dryness about it. It has a short aftertaste which, again, is moderately fruity with a slight tannic body.

Its not a terrible cider - its not bad. Its probably the best cider available at Glastonbury in fact. Given that I have the choice of other Burrow Hill ciders that are excellent, I am not sure I would buy this again. 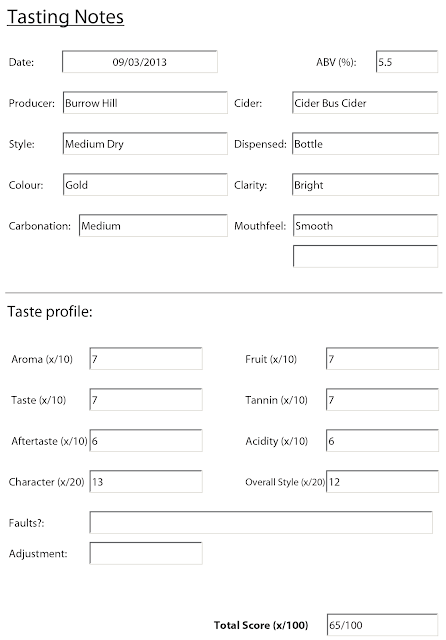