I have no intention to start reviewing pubs or events on here - cider is enough! However, when you find a cider that is only available through one outlet its kind of hard not to. After all, in this case the environment is all a part of the experience of the cider, isn't it?

On the whole, the Corrie Tap is a bit of an institution within Bristol - situated in the historical area of Cliften (I ought to have made that 'Studenty' as that is what is really is). I find Clifton as a place a bit trendy with designer outlets, restaurants and even town houses (London in miniature with a Bristolian outlet:-) Within this environment, the Corrie Tap is a pokey little pub at the end of a cobbled street. It does feel a lit bigger inside though, with wooden everything (and lots of varnish) - a smallish bar area too. And behind the bar? Lots of ciders - mainly of the Thatchers, Westons and Gaymers ilk, but all sold from bottles, on tap and from several wooden barrels. Oh, and there is some real ale too.

The 'Tap' has lots of history itself. Going by the boards outside the pub it was established in the mid-late 18th century and has had some colourful landlords. It is proud of its 'ciderhouse' status; with chalk boards declaring what the latest offerings are with the percentages alongside. You can even buy badges saying 'I've been Corried'... which brings me back to the main point. This is a student pub with a reputation. If lots of students and music are not your thing, then I would get there early in the evening and avoid on a Friday/Saturday.

The bar staff are friendly, helpful and (the guy I spoke to was) well informed. Having described the ciders for me, I asked if they sold anything from smaller, artisan producers. Sadly, no. They have a great relationship with Thatchers and do not vary their cider. So for the moment anyway you won't find 'guest' ciders or something that isn't available via 100 other outlets... that is, except for the Exhibition cider.

Exhibition cider is produced for the Tap by Thatchers (hence the labels). At 8.5% it is all you can get from a cider in terms of strength. When I ordered it came in a pre-filled half from a large tray of halves. "70% of all our sales are Exhibition cider", I was informed. At over £2 per half, its a good earner for them (although bloomin steep for a half pint!). They must have trendy students to aim it at!

So, what is this cider? Its a slightly sparkling, dark golden cider which is bright and has a faint cider aroma. It also has a deceptively mild taste. Not juicy at all (although it is very sweet) but fairly deep with a rounded tannin and very little acid behind it. You can tell that it is Thatchers to a degree (it has that 'Green Goblin' feel to it). However, I am not sure its just another Thatchers relabelled... its too strong for a start!

The aftertaste is tannin but mostly sweetness. It goes down OK. The sweetness is a very big feature of Exhibition cider and is persistant all the way through the drink. Not really my thing, but I have to remember that this is geared up for students in the main - and why not? It is a competant cider which I am glad I have tried.

As a small note, I was seriously tempted to up it by a few points for the decent music playing. I always felt that Muse goes well with cider:-)

If I find myself in the right place and the right time (i.e. Bristol during a week day at about 6pm - the Tap only opens after 5.30pm during the week) then I would visit the Coronation Tap again. I would also fairly likely order another half of Exhibition cider - well, I have reviewed all the other ciders they offer! I would also take my cider learning friend there too.

73 points earns a bronze apple for Exhibition Cider and the Corrie Tap and perhaps is a little high for the drink itself. Wonder if it would score as well outside of the pub? Its not one of the greats, but at least its not an alcopop! 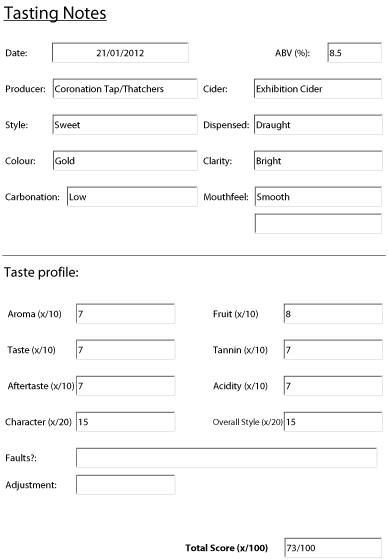